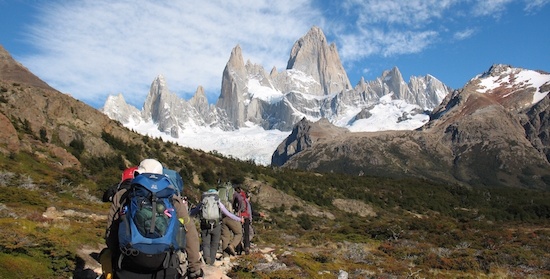 Whether you've been hiking for half a century or are looking to hit the trail for the first time, one of the greatest joys of hiking is that there are so many different things to discover on your own two feet.

When you read a description of a hike in a guidebook or on the AGC website, you may encounter terms you’re unfamiliar with, especially if you’re new to hiking or have only hiked close to home.

Alpine (adjective): The Alps are the highest mountains in Europe, and “alpine” describes anything related to a high mountain environment (such as “alpine flowers”). 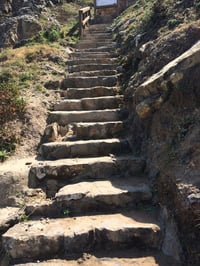 Climb (verb): In hiking terminology, climb means “to go uphill” or “ascend” (vs. climbing a vertical rock face using a harness and safety rope). A “steep climb” is a steep uphill section of trail. A hiking trail might have sections with large rocks that you need to climb over; see “scrambling.”

Drainage (noun): A drainage is the path that water follows on the ground such as a wide river valley, a deep canyon, or a shallow creek bed. A drainage does not necessarily have water in it— many desert canyons only contain water after a rainstorm, and some creeks only run after snowmelt or a downpour. 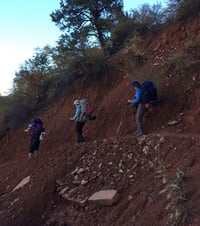 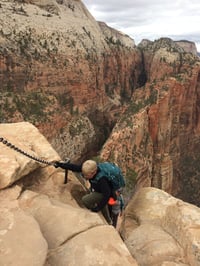 Exposure (noun): An "exposed" trail has a drop-off on one or both sides. The trail may be wide or narrow, and the drop-off may be sheer or a gradual slope. If the trail is narrow with a steep drop-off, there might be a protective barrier or a chain/cable to hold for security. Exposed terrain can be mentally challenging for people with a fear of heights, even when the actual risk of falling is very low.

Pass (noun): A navigable route through mountainous terrain. A mountain pass generally makes use of the lowest spot between two peaks or along a ridge. In high mountain ranges, the lowest point on a ridge is called a "col." (See also “Saddle.”) 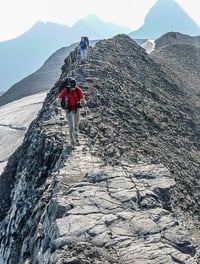 Ridge (noun): A ridge is a geological feature consisting of a long line of high ground that form a continuous elevated crest for some distance. Related terms: crest, peak, summit.

Saddle (noun): The low point between two areas of high ground. If you are in a saddle, there will be high ground in two opposing directions and low ground in the other two directions. A saddle is typically u-shaped. The term “gap” is used in the southern U.S. and “notch” (typically v-shaped) in the northeast. (See also “Pass.”) 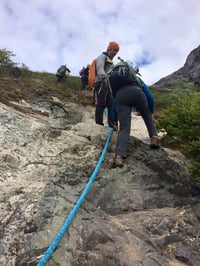 Scramble (noun): An area of rocky terrain that requires you to use one or both hands for stability and/or to boost yourself over rocks. You can hold both poles in one hand to free up the other hand or stow your hiking poles in your pack for use of both hands. If the scramble is steep or exposed (see “exposure”), there may be a fixed cable or metal bars to hold on to for added security on that section of the trail. 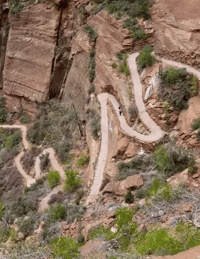 Switchback (noun): When a trail zig-zags across a steep section of terrain instead of going straight up. Switchbacks add distance to the route, but they’re easier to hike than near-vertical trails. Also, trails with switchbacks are less prone to erosion. The apron is the transition area on a switchback where you change direction (go from zig to zag)

Tree line or timberline (noun): The edge of the habitat where trees have enough oxygen, moisture, soil, and warmth to grow. We often refer to “above the tree line” on a mountain (i.e. an alpine tree line), but deserts and arctic environments also have tree lines beyond which conditions are too harsh to support tree growth.