When you’re a world traveler and avid hiker who has been a vegetarian for more than 50 years, you learn a few pointers about how to eat well on the road. Aggie Alvez, who has traveled with AGC for many years and has been a vegetarian since she was eleven (and moved to veganism about 12 years ago), shares five action steps that she takes when traveling while vegan.

Whether you’re traveling as part of a group or individually, you are the primary person responsible for the success of your diet while traveling. Following a plant-based diet can take many forms so it’s good to explain where you fall on the continuum. 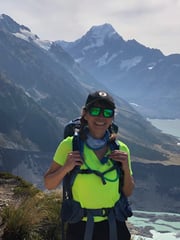 “I like to talk to the people coordinating the trip to find out what’s going to be available and let them know what kind of vegan I am. Many people assume that all vegans want tofu and vegan cheese and vegan meat. I don’t eat any of those things and I wouldn’t want someone to buy extra food that will go to waste. But I also don’t want to go hungry.”

Aggie recommends being explicit about what you do and do not eat (without going overboard), either with a guide, trip organizer, or restaurant staff. Ask about what the typical meals and snacks will be and inform someone if the things they think are vegan are not. She says it’s an opportunity to gauge how much the people you’re dealing with understand veganism and offer them any necessary input.

Do Your Research Before You Go

When Aggie was planning for a trip to Nepal, she happily realized that the local cuisine was largely plant-based. In some places, vegetarians and vegans will enjoy a broad selection of plant-based meals (maybe even more so than at home!). To figure out how a particular cuisine and country measures up, Aggie recommends researching the blogs of vegan and vegetarian travelers and see what they write about special diets in particular countries. Similarly, “The Happy Cow” app tells you everything you could want to know about veggie-friendly restaurants and grocery stores around the world… and it’s free! 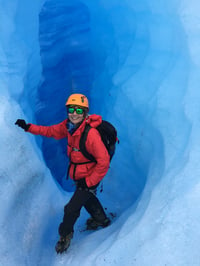 Whether you ascribe to a special diet for health, moral, or other reasons, it is important to acknowledge that in many places your chosen diet is not the norm. You aren’t going to be eating the same way that you do at home- there may be less variety and you may be stuck with fewer options. But as Aggie says, “you’re only going to be there for a limited amount of time- you’re not at home and so your food will be different than if you were, and that’s okay.”

If you’ve communicated clearly and done your research you’ll know what to expect. While you may be pleasantly surprised with a special dish or extra fresh fruit and vegetables, be aware that if your trip organizer tells you there isn’t a lot of variety that you should believe them.

Bring Your Own Food

Aggie always travels with her own food and that it is infinitely easier to do so today than it ever has been. In addition to single-serving sized foods that are easy to pack, there is also more widespread access to high-quality plant-based foods.

Her first step when packing food is to ask herself what she likes and see what is easily transportable. This usually leads to a list including individual packets of peanut butter, hummus, and oatmeal as well as vegan protein bars. For Aggie, most of the food on this list is multi-purpose- it can be used for a boost of protein, for a snack, or extra food if there wasn’t enough for you.

She also recommends the dehydrated meals that are designed for camping because they’re light and easy to pack. They only require adding water and there is a good selection of vegetarian and vegan options available. The same is true for peanut butter powder- it’s light, it can be eaten alone or mixed with other foods, and it is wildly easy to use. Aggie recommends asking yourself “what are your basic needs, and then what are the little treats you know you’re going to want that might be hard to get?” For her, the hardest part of a meal to come by as a vegan is dessert so she always brings her own dark chocolate.

First things first- you don’t go on a hiking trip for the food. On an AGC trip you’ll likely encounter quite a few delicious meals (especially if our guides are cooking), but remember that a hiking trip isn’t a foodie trip. Aggie has attended a vegan yoga retreat in Mexico and a vegan Italian cooking trip to Italy. She ate incredibly well, but that’s because the focus was on food, not hiking.

So Aggie says the ultimate guideline is to be flexible and remember that you aren’t going to go hungry- you’ve brought your own food as a backup! She also points out that it’s helpful to think about the role of the guide not as your personal chef but instead as someone who is making sure you’re staying fed.

“If you want a foodie trip, book a foodie trip!” Aggie says. And remember that things could go awry whether you’re on the road or in your own kitchen, so flexibility is key to enjoying your trip.

So there you have it- five easy tips for success when traveling as a vegan or vegetarian. And remember that wherever you travel, new dining experiences are an adventure!